“Fifty bucks if you can spot a cloud.” That was Ray. 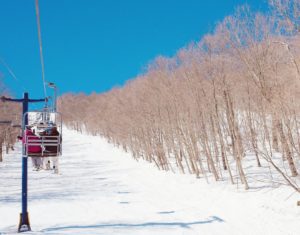 We gathered at the top of the double Ray, Alan, Brian, Lia, Maddie and I – readying for another lap on this perfect bluebird day.

As soon as I’d arrived it was as I’d hoped. Clear blue over a mountain with 100% coverage. Packed powder and seemingly endless untracked through the trees.

The trees. Again, that’s where we were heading.

Our first descent started with Brian and Lia on Overlook. We ducked into the woods just past the old T-Bar. There was plenty of fresh but even tracked routes were fantastic. Sometimes I prefer to follow another’s line in the hope of avoiding “snow snakes.” 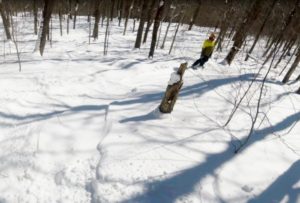 Brian waiting on me

Brian and Lia expertly navigating the tight lines through the woods, back onto Overlook, where we found another spot to drop in.

It’s always so inspiring to ski with Brian and his daughters Lia and Ava. One of the many families that have made Plattekill a second home. Like others, they rent a house nearby every winter and are at Platty nearly every weekend.

The ease in which Lia followed her dad, dancing through the glades, weaving between tight trees, popping over small features with complete grace, was an absolute privilege to be a part of. 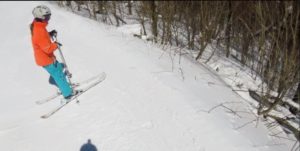 Soon after our small group met up with Ray, Alan, and Alan’s daughter Maddie. We met at the top of the double, and there was no question as to where we were headed.

After crossing through the trees between Twist and Ridge Run, Maddie and Lia broke off. The rest of us ultimately dropped in off of Cat Track into the entrance to “Plattekill Riders.” It was the first time I’d skied there since spending the good part of an October afternoon clearing it of brush, rocks and the large trunk of a fallen hemlock.

Having cut much of it, I knew what was beneath. But any hint of the rough terrain was completely covered. The snow was unmarred, light, deep, incredible. We’d even created a bail-out option in case it was too rocky, too gnarly – but it wasn’t needed. 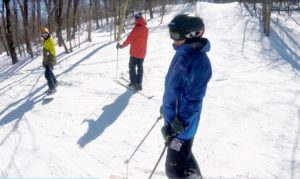 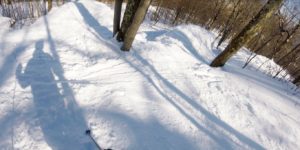 I didn’t huck the cliff, but instead followed Alan through a small crevice, curving tightly between the outcroppings.

For anyone wanting to drop off the top, the landing would have been soft, perfect for any kind of GoPro-worthy air.

I suspect Lia or Maddie would have chosen that more “direct” route.

Excepting the obligatory run down Block, we returned, lap after lap, discovering new untracked paths. Plattekill seems to quadruple in size once the woods are in play. Regretfully I had to call it before last chair, as my legs were gone. A shame, there was still so much more to explore.

As always the lodge bustled with live music and celebratory conversations of those who’d created another day of memories. 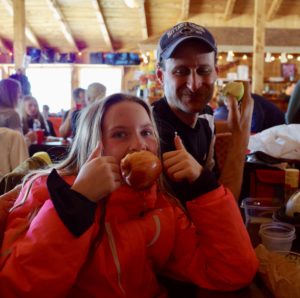 Brian and Lia (no caption necessary) 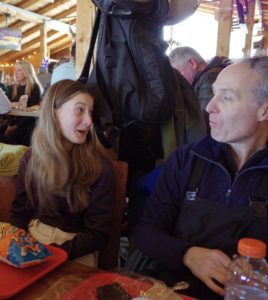 I grabbed an IPA and joined those on the deck, soaking in the warmth of a perfect afternoon. 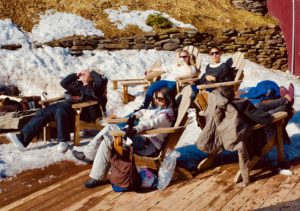 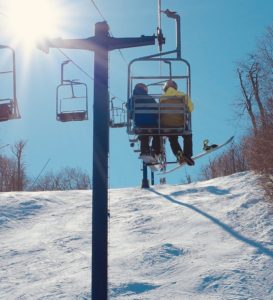