Line UP: Platty’s Ski School Takes It to the Next Level

[First let me get to the point: if you’re going to ski Pres. Weekend, line up your lessons now. (They book out often before the weekend arrives). Then, read on for the human-interest part; what is going on with Platty’s ski school and skiing with its director]

ROMAN HRAB drops to his knees before a four year-old. Roman smiles up at the kid and nods. The 4 y.o. is on tiny skis and boots even tinier, but the binding isn’t right. He helps get it set and has infinite patience. And, a smile. This is his ethos, also Platty’s ski school’s. I’m waiting for him to come ski with me, and he’s not in any rush to get out there. Not until everyone is happy.

Then, another instructor, Yosef, meets his lesson. Listening in on the conversation the way he asks if the student had been on a magic carpet, how he feels about using poles, being on the chairlift, Yosef exudes warmth. It’s clear they both want to be there teaching, that teaching is not a way to get a pass and get on the hill but about that moment helping someone else.

One of Platty’s instructors making sure a new skier starts off on the right foot. (photo by Yosef Gillers). 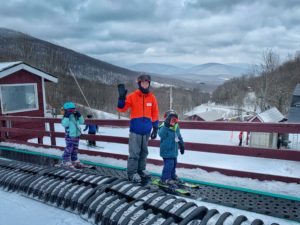 It’s all smiles on the magic carpet (photo by Yosef Gillers).

In the winter Roman is an educator seven days a week: four of them at Bard and then three (often more) at Platty’s ski school. Now to put this in perspective: I teach college and grad students, and every year I ponder teaching skiing. I love teaching for its moments of connection and people getting it, when ideas and concepts become theirs. (Also I learned to ski as an adult and remember vividly my first time down Northface, my first powder day at Platty etc). Yet, after a semester of commuting and grading, I don’t have it in me. But Roman does.

And maybe the moral of the story is… you get kids to ski free (under 6 at Platty) and you never know what might happen. Become head of the ski school? That is Roman’s story. His kids grew up skiing here, and they all fell in love with the mountain. When the kids were around 11, he saw an ad on Facebook to teach there. Now he is in charge of the ski school itself. When he answered the ad, he mentioned teaching his kids, and was asked, “So how old are they and do they want to become a junior instructor?”

It was and is, and now those junior instructors are getting PSIA certified because PSIA (Professional Ski Instructors of America) is running their first-ever junior instructor certification program this year. (Also his daughter still teaches, is now nearly off to college and one of the most requested instructors on the hill). Platty is also a place where people teach and then head to Vail to teach for a month or so. And, it is a mountain where skiers who grow up skiing here are amazing. Witness Dylan Prado who keeps getting golds in freestyle competitions, or his father and uncle who also grew up skiing there. Or: Roman’s kids…

Platty is also the kind of place that prides itself on being fiercely independent, which means a lot of latitude in running the ski school. If you have a vision, you can make it happen. Which is what Roman is doing. This year Plattekill became a PSIA Member School. The benefits include a day-long clinic with PSIA Alpine Education staff member, examiner, and skier /mentor extraordinaire Leigh Pierini. (She too has long Platty ties. She is married to Doug Pierini, who along with his brother Jeff taught with Laszlo when Laszlo first came to Platty. Doug is now COO and VP for Vail’s Eastern Resorts.) And the mountain is hosting a Alpine Level I exam. All of this translates into a commitment to training but also opportunities for instructors to grow on the hill.

Topping it off is a new junior racing program. That’s brought together talents: Bill Pammer, who worked with the USSA racing program at Belleyare, and Mike Mandel, who’d been the race director at Campgaw in New Jersey. Kids will compete in races throughout the region starting this year, with Platty’s first female athlete racing in March. 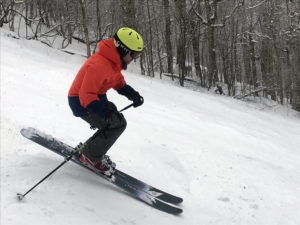 After Roman gets up and we get on the lift, we do a few runs. There’s this way ski instructors out West ski—these turns that move from a skid to an arc carved around anything, bump, crud, pow. (I know we’ve had little of the latter this year). This day is a combo of heavy crud (think weird chunks, not quite ice but akin to ice and then down some trails with brush ) None of it daunts Roman who keeps making these big long elegant turns. Which is a thing to behold. Just watching him and following him, I get to ski better. Crud, brush and all.