WHAT DO PLATTY’S two bloggers want for their birthdays? Powder. And, this year we got it. Not in inches but feet. Isaac and I celebrate the same week in March at the top and tail ends of the week (and at either side of the vernal divide). And to celebrate: fresh powder, creamy, rich, awesome. 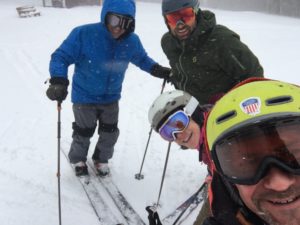 Smiles all around with Marc, Isaac, Jen and Roman (as we try out our album cover shot) Picture thanks to Roman Hrab

It was so good, I took no pictures. In fact, it was three days of skiing that were so good I took no photos. I couldn’t. Instead I begged others for theirs (thank you to Cynthia on ski patrol and ski school head Roman).

Friday’s snow was so heavy at one point when I was just exhausted and my sprained ankle couldn’t handle any more, I stood in the lodge and stared outside dumbstruck. I counted the cars in the lot: twenty. This translated into fresh tracks all day. Marc, Rich, Isaac, Laz, Fred and Maureen were skiing laps over and over and over with yelps and cheers.

The wind picked up in the afternoon and swept away all the previous tracks. Freefall, which had had some perilous thickets, was buried and easily the best run all weekend. 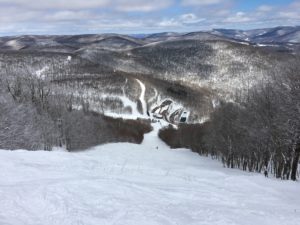 The view down Freefall on Saturday. Yes, that’s only 1 skier. Photo by Roman…

This was billed as the Beach Party. But really it could count as Old Man Winter’s do-over. Or maybe Old Person Winter’s (to be gender neutral). Whichever you pick, Ullr made up for what has been a bony season. And the Beach Party felt like mid-January. I needed boot heaters but didn’t have them. What I did have was (see this picture thanks to Cynthia) on my 5th run: fresh powder on Block. Still. I forgot just how much snow there was until Cynthia sent the picture. 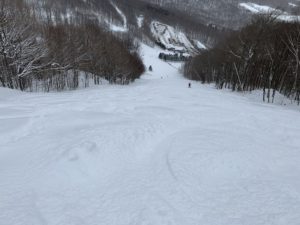 After 5 Runs Block still has powder… Photo by Cynthia Garvey

The snow was light, not heavy, not wet or dense but set up on a perfect base. It stayed cold AND the sun came out. People hit the woods, skied the trees, screamed in glee, and I skied more runs than I thought possible. I began at 8:30 and went until 5 pm because Laszlo kept the lifts running thanks to Daylight Savings. (also thanks to ski patrol who was going from 8-5:30…). It was the day everyone called “epic.” And then apologized, then said that they hate to overuse the term, but that this was the best day of the year. 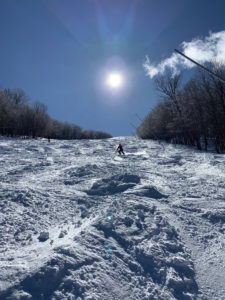 What else can you call this but EPIC? Photo by Cynthia Garvey

This was spring, the Beach Party. It was sunny; it was warm. I was broken. At one point I fell on Plunge and was so pleased to be lying in the snow I didn’t move. I just wanted to be cool and to not have to ski another bump. (Though I did. The bumps were great).

On Sunday Ski Barn came out, Roman’s family visited in force (check out his Instagram for the sweet multi-generation extended family pictures @romanhrabstudio). It was also Ski-Pass Sunday when any pass from any mountain netted a lift ticket. People from every mountain showed up. They came from Belleayre and Hunter and Windham and places I’d never heard of. The cars went down the road nearly a mile and there was a party on the deck and glee all around. People kept saying, “Wow this is Platty? You get to ski this all the time?” To which the regulars would nod and say emphatically yes. And then hope the visitors might keep the secret to themselves. 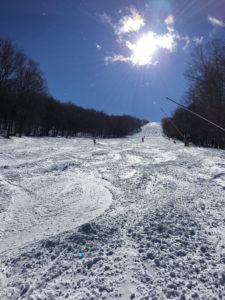 Roman captures the joy of skiing on Sunday….

At the end Cynthia and David discussed what happens after the Beach Party. They named it: Gravy. As in everything else is gravy, a gift… There were jokes about mashed potatoes and bumps and gravy being served.

As I was leaving at 6 pm (after skiing again until just after 5), I ran into Macker, who runs Mountain Ops and many other things. I thanked him for the season. He said: What do you mean, thank you? I told him I was going away. He’s like what, for a month? I said, Nah but the next couple weekends.”

Macker: We’re not going anywhere. There’s 4 feet on Plunge and more snow on Block. We’re not closing anytime soon. It ain’t over until it’s over.

Bring on the gravy.